How about controlling heavily armed robot on a defense mission against waves of other enemy-robots? If shooting from plasma guns, dropping small neutron bombs on dozens of hostile autonomous machines sound interesting, than this game is just perfect for you.

Naming robot game 'Robot Arena' seems to be quite popular, because this is not the only arena I've come across while searching on-line. The first one was probably Gabriel Entertainment's game for Windows platform from 2003. This being a free flash online playable game has nothing to do with that one.

Robot utilizes has some pretty advanced arms such as gatling gun, flamethrower, plasma shield, spread cannon, ion grenades and do I have to mention lasers? Having radio controlled autonomous machine with that kind of weaponry is just mean. Of course, initially some weapons are locked. To unleash all that power, you will have to do something first. And one of the first things to do is to stay alive. 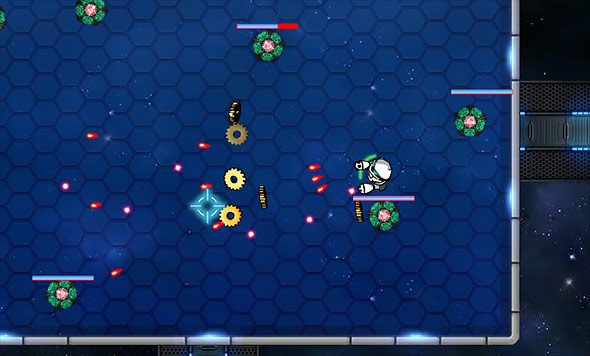 Your robot will be fighting waves of enemies. Your job is just to initiate new wave and the enemy will be jumping onto you by themselves all over the scene. Dead enemies will drop coins, which you collect to exchange later for better equipment. To move, you need to use keyboard (the usual model with wasd keys). You can pause the game at any time simply if you press 'E' and switch from combat to 'equip' mode. That means you can go shopping any time you like. 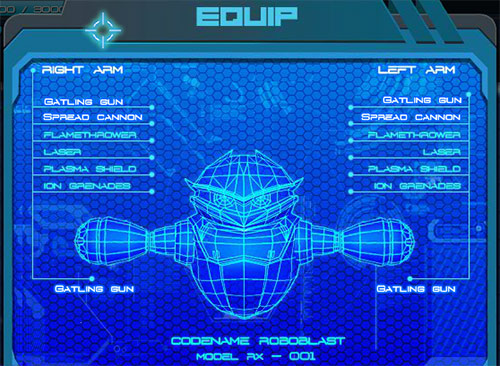 Your drone will be shooting constantly, so you don't have to worry about that. Ammo is endless as well, I mean the bullets. The mouse controls the direction of shooting. Additionally, if you make a left click and hold it like that, the dron will spread his arms and shoot sideways. If you press the 'spacebar', robot sets up and immediately detonates a bomb which kills everything in a small radius. Bombs are expensive, so you should keep them when it gets really hot.

Upgrades are done interestingly. Not only that you are must unlock certain types of weapons, but you can do upgrades on the available ones, say by buying ammo, such as bombs, more plasma shields and so on. And all this goes for just a basic equipment level. Beside that one, there are two more levels: one of medium and another one of advanced technology level. Add a tone of enemies on top of that and you'll get a great fast-paced and exciting defense shooting arcade game with robots.