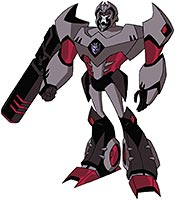 The Decepticons are the war driven robots, led by the evil and nasty Megatron. Megatron has always been a fan favorite because of attitude and disdain for his followers. Megatron is the ultimate transforming robot to be created. He can change his shape to fit any need meaning that he can be large enough for another robot to fit inside him or he can become small enough to fit in the palm of a hand. Megatron has many weapons at his disposal besides just ordering the other Decepticons to do his dirty work. Megatron can shoot lasers out of his eyeballs and can retract his hands, replacing them with super powerful guns. Megatron is strong and has the heart of a true fighter. He stands his ground until his military brain tells him he must retreat. Megatron, like all mastermind schizophrenic evil geniuses, uses an alias. At times, he will go by the name Galvatron. 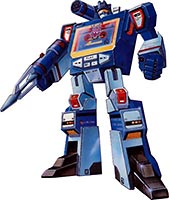 Soundwave is the next fan favorite of the Decepticons, This robot, who is able to transform into a mini-cassette recorder, is the Decepticon’s Chief Communications Officer. He is able to jam nearly all transmissions that the Autobots try to send. He also makes for the perfect spy. When he transforms, he is very small and able to remain unnoticed by humans or Autobots. He can record conversations, adding to his spy-like capabilities. Soundwave is also a trusted adviser to Megatron and is completely loyal to him and the Decepticons. One of the things that make Soundwave so loved by fans was that his cassette tapes were actually just smaller Decepticons. It was like getting a three or four for one, deal. These tapes can transform from their tape form and protect Soundwave or they can act independently and complete tasks for their master. 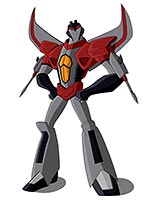 The third Decepticon to make on the list of top fan favorites is none other than Starscream. This cunning robot has the ability to transform into a fighter jet, complete with launch capable missiles. He is the second in command of the Decepticons and answers only to Megatron. Starscream is not to be trusted however. He openly wants to be the leader of the Decepticons and has proven his treacherous ways numerous times over. Starscream is also very smart; he was a scientist before the war broke out between the two factions of robots. He found the war to be exciting, so he joined Megatron and his army. Starscream has betrayed Megatron several times and has actually wrestled the leadership away from him, only to lose his role as leader after a devastating defeat to the Autobots.

Transformers started out in the 1980′s and have remained a relevant part of children’s and adult’s lives today. There has been many spin off series and comic book adaptions that are part of the Transformers legacy. The recent motion picture trilogy brought back the love of big robots and it’s a love that doesn’t seem to be going to die out anytime soon. Why? ‘Cause there really is more than meets the eyes.