Director Michael Bay has been known for making big budget, high octane adventure movies for decades now. He is the man responsible for bringing the ultimate mechs in pop culture to the big screen with Transformers and the following sequels. Now he is bringing us another romp with the Autobots in 2014 with Transformers Age of Extinction. This new movie will be an “out with the old and in with the new” mentality as it stars an all new cast of humans trying to save earth from the evil Decepticons.

Just to recap for those of you who may have been living under a rock for the past thirty years, Transformers is about a species of intelligent robots who destroyed their home world by warring with each other. There are two main sides to this war; the Autobots who are the good robots and the Decepticons, who are the bad robots. The war between the two has stretched across galaxies and has landed on our home planet. This new movie will take place four years after the conclusion of the last film.

Age of Extinction will star Mark Wahlberg as the main character, a down on his luck inventor who just happens to have a run in with the mega sized robot. Because details are scarce and the rumor mill is running wildly, there is a lot of confusion as to what the end game of the movie is really about. Fans of the previous movies shouldn’t worry however, as this new entry will be written, produced and directed by the same team of individuals who have worked on the series since the beginning. The new cast will consist of Kelsey Grammer, who is reported to be the lead human villain and Nicola Peltz. Grammer is most known for his lead in the tv show Frasier and Peltz is known for her work on the AMC hit Bates Motel. Bay is obviously putting even more money into this project since Wahlberg is one of the top 25 most richest actors in US with a net worth of over 200 million dollars.

As for the robots, fans can expect the return of Autobots, Optimus Prime and fan favorite BumbleBee. Also on the Autobot side, there are rumors floating around that the Dinobots will have a role to play in this film. If so, this will be the first time that these types of robots have made it into the film. For the Decepticons, there will be the return of Megatron and his henchmen. The Autobots aren’t the only team adding to their roster, as the Decepticons will have some new mechanical faces as well. Included for this movie is Galvatron and Lockdown. The latter being a bounty hunter. 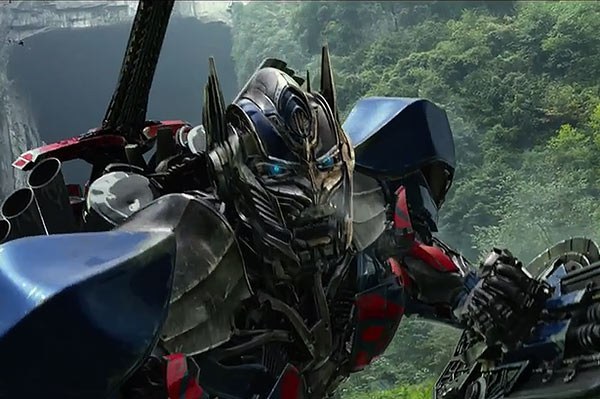 As mentioned earlier the Dinobots will take a role in this film. Fans can be excited to learn that Grimlock, Strafe and Slug will be sharing the screen together. Grimlock is the leader of the Dinobots. He is able to transform into a towering T-Rex with very large horns on his head.

Production for Age of Extinction is already well under way, with pre-production starting in 2013. The movie is being filmed in Detroit and other locations in the U.S and abroad. The film is set to release to theaters in the summer 2014. Age of Extinction will open with a companion video game called Transformers Rise of the Dark Spark that will be available on all the major home consoles. That means that everyone’s invited to the party. See you there!