Transformers Rise of the Dark Spark? Or Fizzle?

In 2015, director Michael Bay and company will release a new Transformer’s movie in the theaters. To accompany the big screen movie, Hasbro has once again joined forces with video game publisher Activision to create a companion game for the movie. The new game will be called Transformers Rise of the Dark Spark and will be released in June of this year.

According to early reports, the new game will take place across two universes. The universe where Cybertron, the home world of the Transformers is located, and our universe. This game will tell the story of the Dark Spark, a relic from the world of Cybertron that is as powerful a relic as the Matrix of Leadership.

While this game is not being developed by the team at High Moon studios, who made the last couple of Transformers games, fans shouldn’t worry. The game is being handled by the same studio that handled the Mass Effect port to the PS3 and this new team has taken great care to keep what worked from the old games and to rid what didn’t work. The new developers are Edge of Reality and along with handling the Mass Effect port, this team has also worked on Dragon Age Origins and the Tony Hawk skateboard series. All of these games turned out to be great games in their respective genres, and to expect anything less of Rise of the Dark Spark would be a disservice to these developers.

The game boasts over 40 playable characters across both of the two warring factions of robots. The game will also allow for experience to be earned by the player in both single player and multiplayer modes. This means that the players will be able to unlock characters and use them in both the single player portion and multiplayer modes. Transformer fans can expect to see their favorite giant sized robots return to the small screen on their home console. For the Autobot side, Bumble Bee and Optimus Prime will be in the game. Among many others representing the Decipticons, Starscream and Swindle will be there to add their attitude. 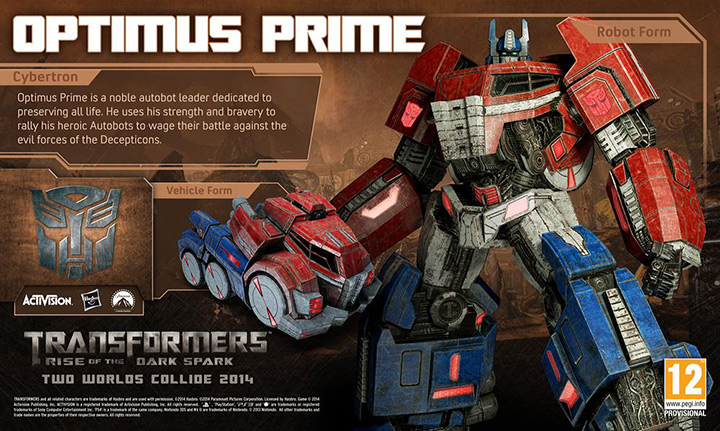 Returning to the franchise is the game’s version of horde, called Escalation. In this mode. players can team up with each other to take down wave after wave of enemies. This updated mode will allow for more environmental effects such as barricades to help fend off the waves. The graphics of the game look polished and the gameplay itself should be polished, also. The game will play as a third person shooter with some RPG elements thrown in for good measure.

Transformers Rise of the Dark Spark will be released this June and should become an early classic with the pedigree behind it. The game will be released on the Xbox One, Xbox 360, PlayStation 3, and PlayStation 4. The Nintendo DS will also a version of this game, however it is being developed by another studio and information is scarce on this version.