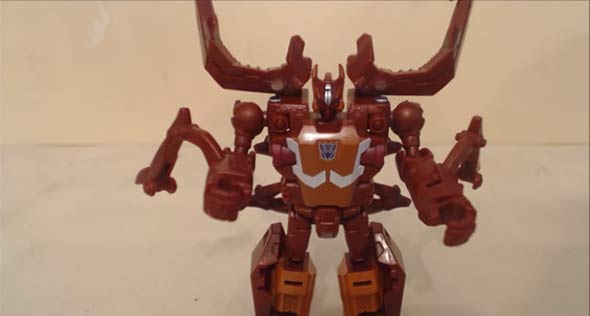 Today we’re taking a look at from the Transformers Combiner Wars, Legends line. This is the first wave at 2016 . And we’re talking about Chop Shop.
Chop Shop was the Mini-Con partner to Legends Megatron.

This version of Chop Shop is a repaint with a new head from that same line Skrapnel otherwise known as Shrapnel – the Insecticon. We are starting off in the bug mode – a beetle (probably Hercules beetle).

In robot mode you get more of that orangey brown color with a little bit more of that lighter orangey cream color. But the newest thing here is the head, but unfortunately as you can see it’s done in that orangey brown color, which resolves in a lot of the details being washed out. Now, this is a nice update to the classic deluxe insepticon’s head but again the details are washed out. You do have a little bit of the silver, you do have that light cream on the horns there but that face is mostly of that dark orangey brown color that just doesn’t really take up details well.

As you can see in the video, Chop Shop is still the ‘maharishi yogi’ of the Transformers universe and can do the splits.

In the end, is this figure worth pick up? I’m gonna have to say probably not. If we knew other deluxe Insepticons were coming in this scale, than maybe, but for the price point, you know you’re missing a weapon, and the head is just too small …