Portal of Destruction is a robot transfromers game where you play as a Predaking robot who transforms back and fort into a flying dragon. These robots called Beast Hunters belong to the second phase of the Prime franchise. They joined the Decepticons because they beleive that Megatron will resurrect the rest of the Predacon race once the Cybertron was restored.
Now, Autobots have to fight against these Beast Hunters as well.

The goal of the game is to bring mayhem to the city by destroying all the buildings and everything in sight. The enemies (humans) will try to stop you with their planes, helicopters and tanks.
The game very much resembles an old Hulk game called Hulk Smash Up (moze link na nasu igru na batu). Here, the graphics of the city, the buildings, robots and everything there is to see is very nicely done. Controls are easy to use and very logical. Even the music is not too bad, even if it goes round and round you can still tune it out or if you wish you can mute it. There is a time limit for every level and that is one more parameter to keep an eye on besides health meter. You start with less buildings and less enemies and work your way to the entire block of buildings and an army standing against you. 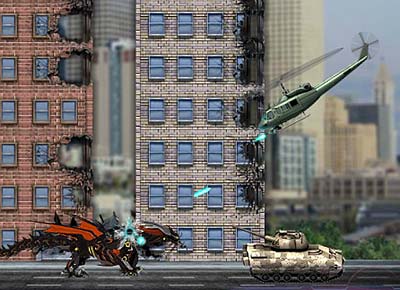 If you destroy the bomb droped from the bomber plane you get the SmartBomb. The eighteen wheeler truck when destroyed brings you triple fire which is very useful to shoot at ground and air enemies at once. And if you destroy the hot dog truck you get a health boost which is always useful.

There are three types of enemies here: