The Invention of Transformers

Just imagine the situation when your car converts itself into a huge robot to reach out and help its colleagues in war against evil. 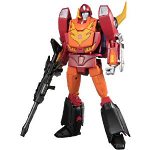 What will you do when this happens just right in front of your eyes? One man wanted to put this science fiction in toys, comics and also in movies. He is none other than the Executive Vice President, Mr. Nobuyuki Okude of the Takara Co. Ltd. The “Transformers”, the most popular brand of toys which became a legend was invented by him. In the year 1984, the American company “Hasbro” bought the distribution rights of the “Transformers” in North America. The Transformers were manufactured from the toy moulds originally made by the Japanese company Takara, whose toy lines were famous as the Diaclone and Microman. It is the dream of Mr. Nobuyuki Okude to create a Robot who will have the senses, feelings and all other characteristics of a human being. His dreams were of the children and the robots playing like friends do.