Comic Creator is all about crating your own Transformers comics - more like a drawing tool than a game. It's because it allows to you build your own comic with transformers characters, complete scenaries, with special effects, explosions, dialog and everything else just like in a real cartoon. You can make everything from the ground up, so if you ever wanted to create your own show or your own cartoon, to make things look different to what we see on TV, to make them the way you want it, now this is your chance.

The first thing you want to do is to pick up a page design. These are shown on your left and you can scroll down the list with your mouse until you find the page template which suites you the best. Than there's a background which you need to drag and drop on the page. The next thing is to use a 'edit tool'. With that you can additionally customize your background by rotating it, scewing, zooming it in and out and generally you can rearrange it as you like. 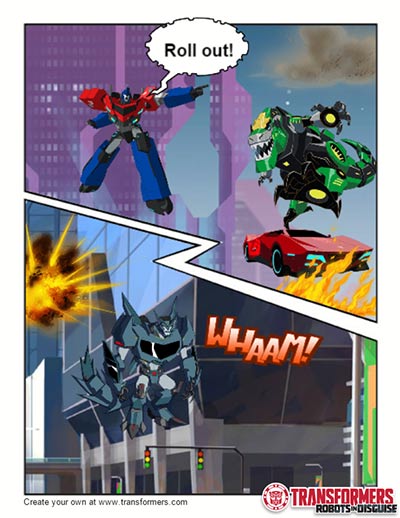 The most importnat part of your creation is to pick up the main characters for the cartoon. There's Optimus Prime, Grimlock and many others from 'Robots in Disguise' show. Add few explosions to it, a fire maybe or a cloud of dust, to make the whole image stand out even more.

And of course, just like in a real cartoon you should add some dialogues. To do so, you need to drag and drop a dialog balloon. You may usually want to zoom it out a little bit to re-size the balloon to fit the character's size. I think you are not able to add your own custom text but you can choose any of the predefined ones. You can make Transformer say "Let's do it" or "Here comes trouble" or you can simply add a bit of "Crash" signs or maybe a "Boom" - there are so many of them. You should add the most appropriate word that explains your cartoon and suites the situation depicted on the image in the most appropriate way.

In the end, when you think the image feels right, you may choose to click on a 'download' button on the right and the image will simply start downloading to your computer, so you can show it later to your friends or parents. It looks really cool and very professional as you can see my creation on this page as an example. And I did that in just a couple of minutes. So I guess with just a little bit more effort you could do some serious cartoons with this tool. And you can create several pages in a row, not just one.

About Robots In Disguise

This is Hasbro's game called Comic Creator, inspired by Robots in Disguise series that's been airing since the beginning of 2015. Up to date we have two seasons and these are cartoon episodes for children but with a premise and a storyline which could be appealing to adult audience as well because it leans to the comedy aspect of it a little bit. The comedy in the show is really on point and this is legitimately a very funny show. More funny for adults than for kids.