In any Hollywood or a Bollywood movie, there are two main characters without which the movie is not complete. One is the Hero who fights for against the injustice and the other is the villain who does the injustice. Many times we see that the role of the villain is more appreciated. The same thought process applies when it comes to comics and games too. The very famous and a large fan club follow Decepticons, the leading villains of the fiction story series “The Transformers”.  These can take many different forms like the fighter aircraft or a vehicle with weapons and sometimes an object that is very smaller than humans. They have the typical villainous look having the purple facial mask and the red eyes always full of fury. We are about to see some of the key characters of the Decepticons. 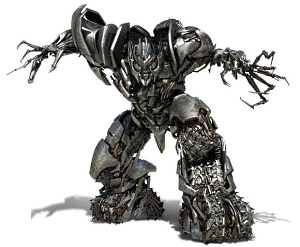 When it comes to power, even the humans fight so why not the robots. The Megatron, a power crazy but shrewd villain, who want to rule the planet Cybertron.  In the very early days Megatron used to transform himself from his vehicle mode of a Tanker Truck to a P38 Walther Pistol by which he used to attack the enemy with very precise blasts. Later he was evolved into his gigantic robot size with the Fusion Cannon on his arm. His cannon is so powerful that it could demolish a whole city block in a single fire. He has the extra power of firing electrical shots by his hands and also shoots laser rays through the eyes. There is a port in his head using which he can change the programs stored in a computer according to his needs. He could even stand against the super powers like controlling the mind. Having all these super abilities leaves no doubt that is the Brains of the Decepticons, A real villainous leader.

Utmost brutality, flawlessness and cleverness are the most perfect words to describe the Shockwave. He had the responsibility of 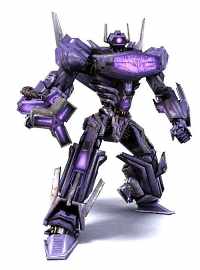 eradicating the enemy with these awesome capabilities. He thinks about how best he can use his all possible powers of weaponry to destroy the enemy in a larger number. Before being modified, he was seen in the form of Ray gun measuring 35 Feet. He has the special power to control the Electromagnetic Fields and use the energy in various forms. These capabilities made him the rightful Commander of the Military Operations of the Decepticons. But secretly Shockwave always waited for the right opportunity to overpower Megatron and become the leader of the Decepticons. 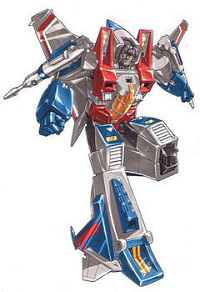 The most creative and the most productive one amongst the entire Transformers family is the Star scream. Before joining the Decepticons he was a scientist. He is always waiting for an opportunity to challenge and fight Megatron to become the leader of the Decepticons. Amongst all the Decepticons, his intelligence is on the higher node. At the same time he is man of no mercy and quite coldblooded. His intentions of defeating Megatron are openly displayed by him to an extent of even having physical fights. He has got a superiority complex over his other subordinates.

Recollecting what we were taught in our school, United we stand Divided we fall, we now understand why the Decepticons, though more powerful, always lost the battle with the united Autobots.