Tribot is a unique model of 3-in-1 robot. Depending on the situation and specific need it transforms very quickly into an appropriate shape. It is specialized in close combat and it will use those skills to obtain its freedom. Some robots it can transform into are smaller and more agile, while others are much heavier and far stronger. And that is why this game is not a simple robot fighting game, because it has incorporated those elements of strategy. On occasion you will encounter a logic problem in a form of a puzzle. Getting to the next level is not conditioned by its solving but it does bring some useful points. 'Tribot Fighter' has phenomenal graphics so make sure you watch an intro animation. If you are interested you can also watch down below the animated movie from the same author called 'Robot Dream'. 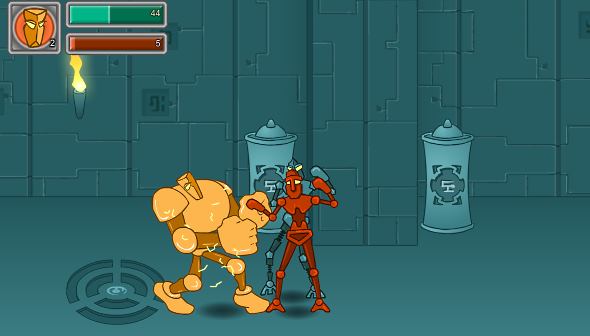 Collecting rewards doesn't directly affect the success of finishing the game. There are 16 different categories. You get your first reward if you only read the entire 'Tribopedia' (reward 'Educated'). Special rewards are earned for puzzle solving, completing levels, collecting all 9 lives and so on ... 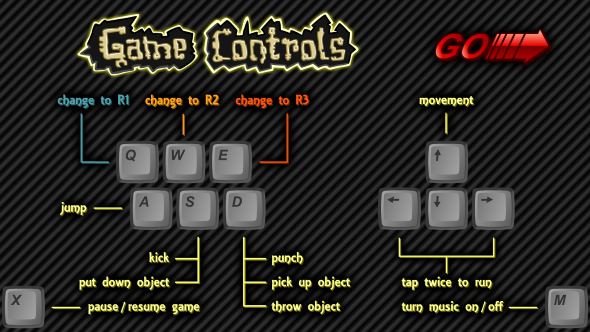 Tribopedia is the name for help within the game. Basic rules of the game are explained there. Tribot can't win a fight against the robot of the same colour, because all of its attacks will be blocked. So, in that case, it is necessary to use another robot. Here you can read about all advantages and disadvantages of every robot individually. 'Desperation' is a specialized attack which is used mostly when you are surrounded by number or enemy robots. It is initiated by simultaneous pressing of an attack key 'A' and defence key 'D'. For each well placed attack you earn points. Once you have enough points, the 'turbo' meter will reach 100%. Then you have double the stamina and strength for 15 seconds. It is very useful to study the Tribopedia in detail before you start playing.

The author is Hristo Atanasov from Bulgaria, who manages the site RatherRandomReality [dot] com. They make flash games and animations. If you have a few minutes to spare watch one of their animated movies about robots. It is 10 minutes long and theme is partially taken from the movie 'I Robot'. The movie mentions the 3 laws of robotics, called 'The Three Laws'. These laws date way before they were mentioned in the Will Smith movie. They were defined for the first time back in 1942 in a SF story called 'Runaround' and this is how they originally go:

Since the author of this story is Isaac Asimov, these laws are also referred as Asimov's laws. The problems occur when the intelligence of robots reaches the point of self consciousness, which is usually when robots start to make their own laws.