Transformers Battle Game is a free game, a side scrolling shooter in which you play either as Optimus or Bumblebee against the waves of enemy robots.

Let's start off by explaining what this game is and how are you supposed to play it.

First you're gonna have to pick one out of two playing modes, single and 2-players mode. Since I do this all by myself, I've went for single play mode so there's no guarantee whether the multiplayer mode will work. 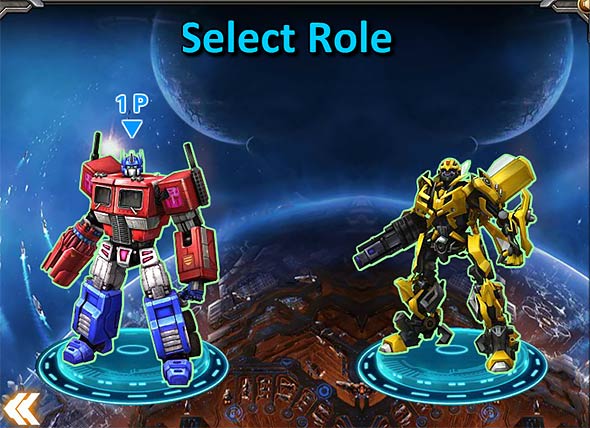 It's good to mention that there's pretty decent 'how-to' page inside the game which explains controls very well. I don't know if this game comes in version fully translated into English, but this one I played is not - most of the instructions given are in Chinese I think.

Controls are fairly simple btw, as either you use WASD or arrow keys. For instance, if you go for wasd playing model, 'A' and 'D' keys are going tobe used for moving in reverse and forward respectively, while 'W' is for jump (or double jump if you press it twice) and 'S' comes as very important key because that's how you can switch between car mode and robot mode. It is important because you get different weapons and different capabilities that way. Mouse is used to aim and shoot always.

The next thing is to pick up your favorite transformer in 'select role' screen. Of course, you will be choosing between Optimus Prime and BumbleBee. 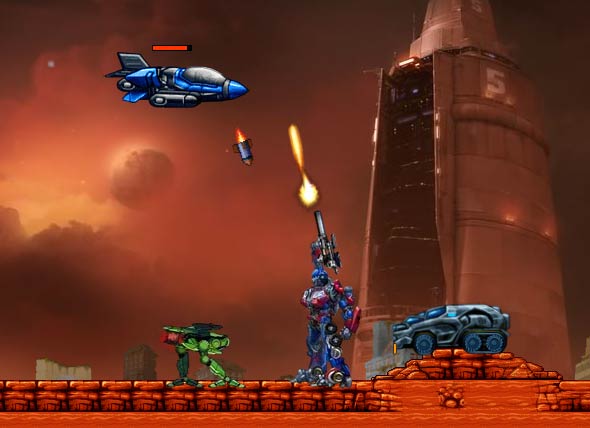 It's a shooting game before anything else. You move from left to right, fighting off other robot troops invading you either from the ground or air. Sometimes you would need to squeeze through tight passages which is when you'd rather use car mode and other times you just run faster and jump to fight against air troops. Your armor is pretty good and it can take a lot of beatings but in the end you are not indestructible, so try to act that way.

You can simply outrun the enemy and get to the furthest right point but the game still won't let you go any further until you clear out the entire level and kill all the enemies from the previous step.