BotShots is an online rock-paper-scissors game made in Transformers style. Bumblebee will try his luck against Megatrona, Nemesis Prime, Starscream and other Decepticons, and your job is to use your head and adequately respond to Megatrons attacks. You know how the original game goes - scissors cut paper, paper beats rock which in turn beats scissors. This game is the same only with other items. Fist beats sword, sword beats gun and gun beats fist and round we go.

Underneath the arena there is a board which alternately shows and moves around elements sword, gun and fist. When you click on two identical items they will form an attack against your opponent. Weather that was the right choice you can't know ahead, so game is based mostly on luck.

If you win, you can earn so called experience points and Energon cubes. To save them for further play you'll have to go to the official Transformers site and register. The game was taken from AddictingGames site, and official site for this game is https://www.bot-shots.com/. On the official site you can also get to play with other robots like 'Hydrax' which are available in BotShop. Hydrax is very interesting because of his extremely mighty sword and also because he can transform into the Dragon Beast. As far as the power ups go, you can earn 'tail whip', throw 'breath fire and fury' at your opponent or use 'beast chomp' - strong and destructive steel jaws. 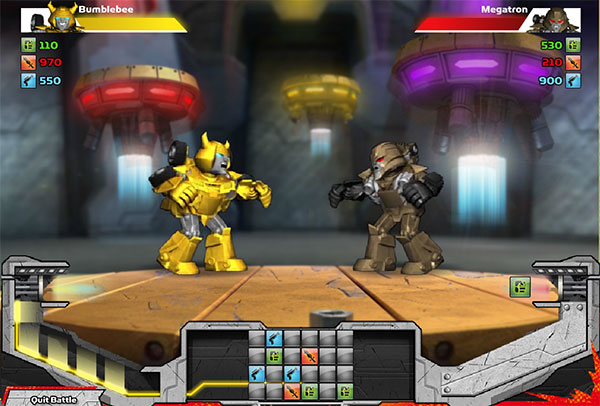