I'll be honest with you. Although being into this 'Transformers' mania for quite some time now, I wasn't aware of 'Female Transformers'. When I started the game and saw that pink transforming robot, I knew I should have done my homework better. So I started to dig about it on the Internet.

One of the first sources I came across was Wikipedia of course. Upon my surprise there's actually a list of female transformers!, and not only one, but several lists depending on the Transformers generation, both on Autobots and Decepticons side. If you are one of those fans who sticks only to the Transformes mainstream, and who recognizes only Bumblebee and Optimus Prime, it's not very likely that you have ever heard of "Elita One" or "Flareup" from Generation 1, or maybe "Airazor" from 'Beast Era', or "Arcee Sisters" from "Revenge of the Fallen". On the side of Decepticons, I also found even more characters such as 'Crasher', 'Flamewar', 'Antagony', 'Blackarachnia' and few others, obviously, with a lot darker and meaner names. 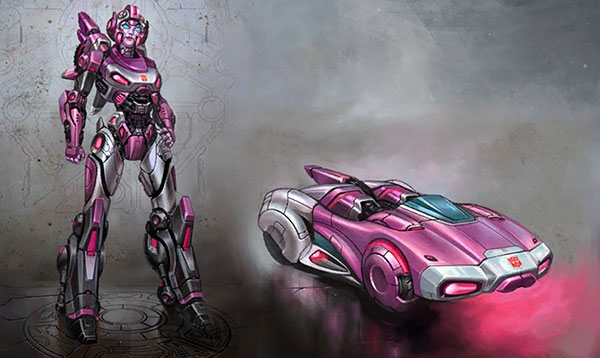 It's definitely good to have them, no questions about that. I believe that if female players take equal share as males in online gaming domain, they also should have their own female heroes, I don't see why not.

So, the question is, who's that mysterious pink Transformer who takes on incoming robots coming from the left and right in this game. According to my little research, it could be either Rosanna, Cybertron Idol who sings for Autobots, or Arcee, who turns into Ducatii 848. When I see how this robot moves and fights, the speed of transformation and aggressiveness, this could only be Arcee. The one thing that confuses me is why is she not turning into a motorbike instead of that flying battleship. If you have different theory about who that mysterious female transformer is, please leave a note down in the comments area.

This is one of the older Transforms fighting games where you control robots only with your keyboard. Interesting thing is that you can play in both single (1P) and multi- that is 2 player mode (2p). There are 9 levels, where each one has different background and different 'enemy-killed' count required.

In multiplayer mode, the other player should use arrow keys for moving and jumping, while '1' key is for the attack.