Crash the robot. is a cool physics game in which you basically just need to figure out the right spot where to place the bomb and let the physics does the rest. Aim of the game is to do whatever it takes to make the robot explodes in the end. You begin each level by placing the bomb at the right spot. At the same time, another ball rolls out and if cleared out its way properly, it rests on the button, which ignites the bombs explosion shattering grumpy robot into pieces. 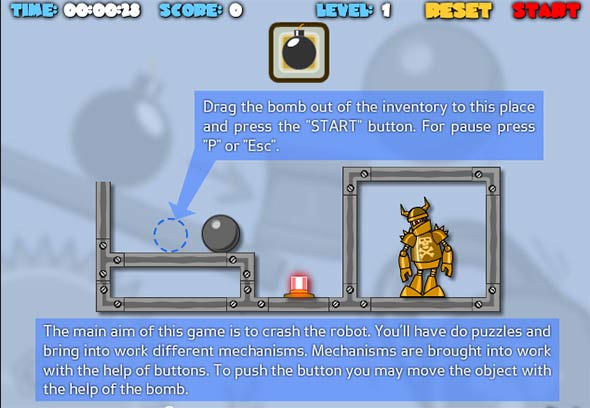 There are 40 levels and 5 bonus stages. That's a lot of crashing robots for one day.

Crash the Robot is a physics based game with mini puzzles and mechanical problems which you must solve to complete the level. Something like Angry Birds but more complex.

As the game progress, new elements start to appear, such as circular saw, electromagnet, mechanical smashing machines, hammer and others. They are all interconnected in a certain way, and it's your first job to figure out in what way, before you do anything. Or, you could also do a try and error approach. So it's your job to figure out how to place the bomb to trigger the series of events which will eventually lead to a destruction of another robot.

We do love robots, but we're also very curious about how they look inside and what they are made from, to investigate their building parts and that's why we want to see them crashed, correct?