Maybe Bumblebee is not in best shape, but he is still capable to defend himself. As you can see, in "Bumblebee Rescue Mission", he had to call a local towing service, to take him for a repair. Bumblebee is attached to a Mike's wrecker which drags him down the curvy road to a safe place. Their location has been compromised because there are lots of Decepticons coming their way.

There's nothing much you can do, except to aim and shoot at incoming trucks by using a mouse. Each collision reduces your overall power which eventually leads to Bumblebee loosing a life. There's a health meter in the upper corner which tracks your health state. As you can see in the background, the town is in ruins. The battle for dominance has been moved to Earth.

I see some people write Bumble Bee as two words, with space in between, as you can see in a title of this game. I've seen a dash in between also. Even though any variation could be widely accepted, I would say that the original correct name for a black-yellow Transformer is Bumblebee (one word). 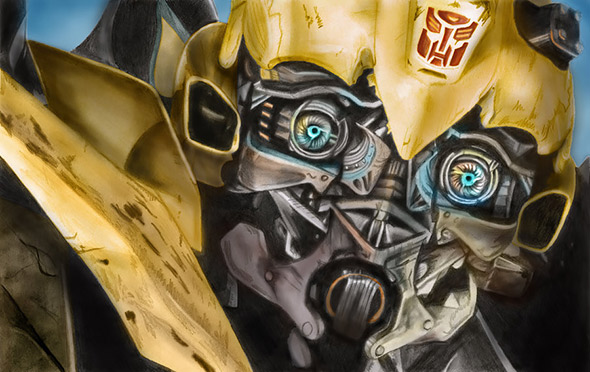 Bumblebee is one of the last made Autobots before the Great War, before the All Spark had disappeared. He is the youngest of all well-known Autobots. He is small but energetic, quick and communicative. He's very good with humans. Because of his rashness, he is more prone to getting in trouble.